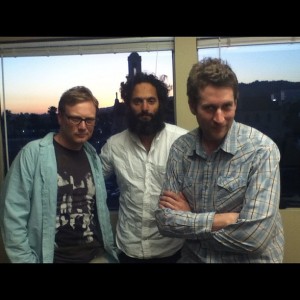 This is a possibly one of the most memorable shows in the entire Comedy Bang Bang (CBB) library. Host Scott Aukerman and guest co-host for this episode Jason Mantzoukas talk about a vast array of topics during the first segment of this show, before they are joined by their guest. Some of those topics include but are not limited to Jason’s favourite things: Comedy, Film & Cinema and Beavers. They really cover the topic of beavers thoroughly which is quite enjoyable for the listener as they catalogue some of their favourite beaver related publications.

This episode was recorded around the 2012 Academy Awards hosted by Billy Crystal. Scott and Jason list and discuss the 12 days of the Oscars, starting at number 1 and counting down to negative ten.

After their short intermission our hosts are joined by, in my opinion, one of the most talented poets I’ve ever had the privilege of listening to. Cowboy poet, Dalton Wilcox, self proclaimed poet laureate of the west, joined the program to promote his new book. The title of which is: You must buy your wife as much jewellery as you buy your horse; and other poems and observations, humorous and otherwise from a life on the range. For the reader of this review I will have already put up a clip of Dalton reading one of his poems for your own enjoyment.

The discussion then turns to the content of Dalton’s poems as Scott and Jason allow Dalton to elaborate on what the meaning behind his poems were. From Dalton’s poetic encapsulation of cowboy life we are lead to discover that the life of a modern day cowboy is a hard and lonely path. Which is only accentuates the issues for happens at the end of the podcast.

As I said at the top of this review this is possibly one of the best episodes of CBB. And if you don’t trust me, listen to some of Dalton Wilcox’ poems and see if that doesn’t change your mind.